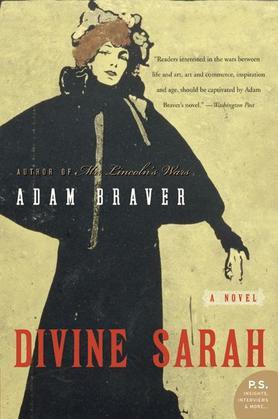 by Adam Braver (Author)
Fiction Historical
EPUB
26 Loans, One at a time
Details

Set over the course of one week in 1906, Divine Sarah reimagines the life of the legendary Sarah Bernhardt. Facing protests from the newly formed League of Decency, the controversial actress is forced to move her latest production from Los Angeles to the new development of Venice Beach. Though this battle is only the most recent skirmish in a tumultuous life, the sixty-two-year-old Sarah is exhausted and beginning to lose the will to fight.

Plagued by maladies of the flesh and the spirit, she begins to search her soul, revealing the truths of her life, including the self-doubt and insecurity hidden beneath an extravagant and confrontational lifestyle. Yet Sarah is not alone in her battle. Vince Baker, an ambitious news reporter, faces his own demons even as he tries to uncover the truth about the greatest actress of the Victorian Age.

This P.S. edition features an extra 16 pages of insights into the book, including author interviews, recommended reading, and more.