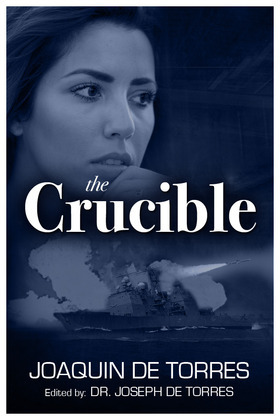 Commander Kristina Torres, the U.S. Navy's preeminent weapons designer, once had a dream of commanding her own ship. But her father's over-protective demeanor, and a horrifying experience when she was a teenager have all but ended any realization of that dream.

Her father, Admiral Ramon Torres, is the commanding officer of the Pacific Fleet, a force that faces a shortage of ships and captains on the eve of war with North Korea and China. He must enforce the globally-protested "Iron Clad blockade" around North Korea which has already caused the deaths of half a million people.

Out of sheer rage and desperation, North Korea has given the U.S. just 24 hours to lift the blockade before it launches every last man, shell and missile onto South Korea and the 30,000 American troops stationed there. China waits patiently for this, planning to launch a million landing troops on Taiwan on the heels of the initial attack.

At the moment, Admiral Torres' daughter is in waters north of Hawaii, on the testbed ship USS Gettysburg, testing weapons that she herself designed. She's thousands of miles away from any war zone, any threat. She's utterly safe. . .at least that's what he thinks.

Stalking behind a pending typhoon is a massive predator. The North Korean juggernaut–the Kim-Il-Sung–has sailed across the Pacific to deliver a message to the U.S. government and the world. When the Kim Il-Sung spots the Gettysburg, it unleashes its message.