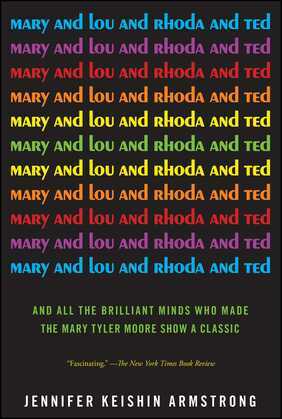 Mary and Lou and Rhoda and Ted: And all the Brilliant Minds Who Made The Mary Tyler Moore Show a Classic

In this “fast-paced and charming…absorbing cultural history” (Publishers Weekly), Jennifer Keishin Armstrong presents an engaging behind-the-scenes look at the making of a classic and groundbreaking TV show that defined the sitcom genre and revolutionized the way women were portrayed on television, as experienced by its producers, writers, and cast.

When writer-producers James L. Brooks and Allan Burns dreamed up an edgy show about a divorced woman with a career, the CBS executives they pitched replied: ?American audiences won?t tolerate divorce in a series? lead any more than they will tolerate Jews, people with mustaches, and people who live in New York.?

Forty years later, The Mary Tyler Moore Show is one of the most beloved and recognizable television shows of all time. It was an inspiration to a generation of women who wanted to have it all in an era when everything seemed possible.

Jennifer Keishin Armstrong?s Mary and Lou and Rhoda and Ted tells the stories behind the making of this popular classic, introducing the groundbreaking female writers who lent real-life stories to their TV scripts; the men who created the indelible characters; the lone woman network executive who cast the legendary ensemble?and advocated for this provocative show?and the colorful cast of actors who made it all work. James L. Brooks, Grant Tinker, Allan Burns, Valerie Harper, Cloris Leachman, Betty White, Gavin MacLeod, Ed Asner, Ted Knight, Georgia Engel?they all came together to make a show that changed women?s lives and television itself. Mary and Lou and Rhoda and Ted is the tale of how they did it.