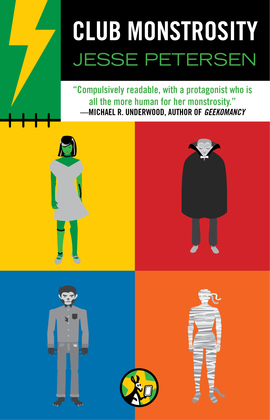 Natalie?s one of Frankenstein?s creations and works in a New York City morgue. So of course she needs therapy. She and her friends?er, fellow monsters?have formed the world?s most exclusive, most dysfunctional support group. What could go wrong?

Undetected in the modern world and under pressure to stay that way, Natalie Grey, Dracula, Bob the Blob, and others (including the fetching wolfman Alec) meet regularly to talk about the pressures of being infamous in the Big Apple. Topics include how long it?s been since their last sighting, how their ?story? creates stereotypes they can?t fulfill, and?gasp?sometimes even their feelings. But when their pervy Invisible Man, Ellis, is killed in a manner reminiscent of the H.G. Wells novel, it?s clear someone?s discovered their existence and is down for some monster busting.

Led by Natalie?and definitely not helped by Hyde?s bloodthirsty tendencies?the members of Monstofelldosis Anonymous band together for security and a little sleuthing. And maybe?maybe?if they don?t end up dead, they?ll end up friends somewhere along the way.