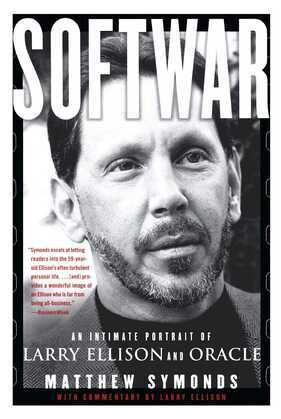 Softwar: An Intimate Portrait of Larry Ellison and Oracle

In a business where great risks, huge fortunes, and even bigger egos are common, Larry Ellison stands out as one of the most outspoken, driven, and daring leaders of the software industry. The company he cofounded and runs, Oracle, is the number one business software company: perhaps even more than Microsoft's, Oracle's products are essential to today's networked world.

But Oracle is as controversial as it is influential, as feared as it is revered, thanks in large part to Larry Ellison. Though Oracle is one of the world's most valuable and profitable companies, Ellison is not afraid to suddenly change course and reinvent Oracle in the pursuit of new and ever more ambitious goals. Softwar examines the results of these shifts in strategy and the forces that drive Ellison relentlessly on.

In Softwar, journalist Matthew Symonds gives readers an exclusive and intimate insight into both Oracle and the man who made it and runs it. As well as relating the story of Oracle's often bumpy path to industry dominance, Symonds deals with the private side of Ellison's life. From Ellison's troubled upbringing by adoptive parents and his lifelong search for emotional security to the challenges and opportunities that have come with unimaginable wealth, Softwar gets inside the skin of a fascinating and complicated human being. With unlimited insider access granted by Ellison himself, Symonds captures the intensity and, some would say, the recklessness that have made Ellison a legend.

The result of more than a hundred hours of interviews and many months spent with Ellison, Softwar is the most complete portrait undertaken of the man and his empire -- a unique and gripping account of both the way the computing industry really works and an extraordinary life.

Despite his closeness to Ellison, Matthew Symonds is a candid and at times highly critical observer. And in perhaps the book's most unusual feature, Ellison responds to Symonds's portrayal in the form of a running footnoted commentary.

The result is one of the most fascinating business stories of all time.