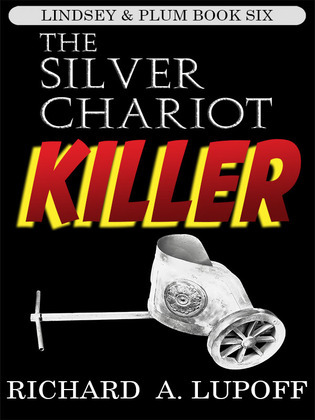 WHEN A MAN'S PARTNER IS KILLED... So begins one of the most famous quotations in all of crime fiction. And just as the murder of Sam Spade's partner, Miles Archer, sets off the quest in the great Dashiell Hammett's greatest novel, so the murder of Hobart Lindsey's partner, Cletus Berry, sets off the quest in The Silver Chariot Killer, the sixth of Richard A. Lupoff's classic series of "Killer" mysteries. It's Christmas week in New York and Cletus Berry's body has been found literally frozen in the ice in an alley in Hell's Kitchen, a black circle marking the entry wound of the bullet that scrambled Berry's brain and ended his life. This wouldn't normally be Lindsey's case, but "When a man's partner is killed, he's supposed to do something about it." Earlier novels in the series built a popular following for Hobart Lindsey and Marvia Plum. Now Lindsey is on his own and on alien turf, and the action grows darker as Lindsey's world grows colder. The Silver Chariot Killer is a case unlike any that Lindsey has faced in the past, and unlike any that the reader is likely to have encountered until now. Great crime fiction by a master storyteller!