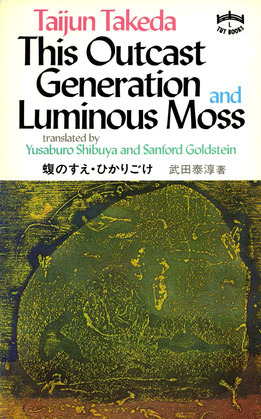 This Outcast Generation and Luminous Moss

by Taijun Takeda (Author), Sanford Goldstein (Translator), Yusaburo Shibuya (Translator)
Fiction War & military Short stories
EPUB
Unlimited loans, One at a time
Details
The two novelettes by contemporary Japanese writer Taijun Takeda that are contained in this book were chosen for their overall excellence to be included in our current Library of Japanese Literature series. Both stories are relatively modern, one dealing with an incident of cannibalism in Hokkaido during World War II and the other about the Japanese who lived in Shanghai following the defeat. This Outcast Generation, according to the translators," is basically an existentialist novel and it reminds of Camus, but it is of course Japanese in essence."

The story tells of the life of a man who as a member of a defeated nation living in a foreign country, feels no responsibility to anyone but himself--and this only in relation to food and water. Eventually, the hero is given the chance to initiate a change in his aimless life and he acts, for mankind or for love, in committing what is meant to be a Dostoyevskian axe-type murder.

Translator Goldstein calls Luminous Moss "a real tour-de-force. I know nothing like it in any literature, though of course the problem of cannibalism has been treated by others."