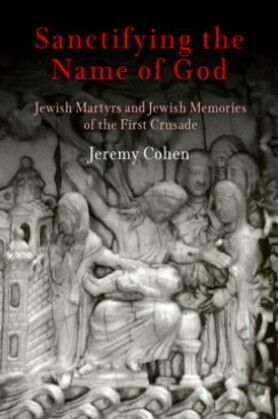 Sanctifying the Name of God

How are martyrs made, and how do the memories of martyrs express, nourish, and mold the ideals of the community? Sanctifying the Name of God wrestles with these questions against the background of the massacres of Jews in the Rhineland during the outbreak of the First Crusade. Marking the first extensive wave of anti-Jewish violence in medieval Christian Europe, these "Persecutions of 1096" exerted a profound influence on the course of European Jewish history.

When the crusaders demanded that Jews choose between Christianity and death, many opted for baptism. Many others, however, chose to die as Jews rather than to live as Christians, and of these, many actually inflicted death upon themselves and their loved ones. Stories of their self-sacrifice ushered the Jewish ideal of martyrdom—kiddush ha-Shem, the sanctification of God's holy name—into a new phase, conditioning the collective memory and mindset of Ashkenazic Jewry for centuries to come, during the Holocaust, and even today.

The Jewish survivors of 1096 memorialized the victims as martyrs as they rebuilt their communities during the decades following the Crusade. Three twelfth-century Hebrew chronicles of the persecutions preserve their memories of martyrdom and self-sacrifice, tales fraught with symbolic meaning that constitute one of the earliest Jewish attempts at local, contemporary historiography. Reading and analyzing these stories through the prism of Jewish and Christian religious and literary traditions, Jeremy Cohen shows how these persecution chronicles reveal much more about the storytellers, the martyrologists, than about the martyrs themselves. While they extol the glorious heroism of the martyrs, they also air the doubts, guilt, and conflicts of those who, by submitting temporarily to the Christian crusaders, survived.