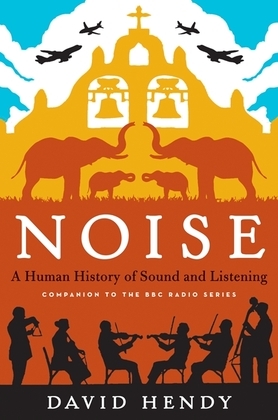 What if history had a sound track? What would it tell us about ourselves? Based on a thirty-part BBC Radio series and podcast, Noise explores the human dramas that have revolved around sound at various points in the last 100,000 years, allowing us to think in fresh ways about the meaning of our collective past.

Though we might see ourselves inhabiting a visual world, our lives have always been hugely influenced by our need to hear and be heard. To tell the story of sound—music and speech, but also echoes, chanting, drumbeats, bells, thunder, gunfire, the noise of crowds, the rumbles of the human body, laughter, silence, conversations, mechanical sounds, noisy neighbors, musical recordings, and radio—is to explain how we learned to overcome our fears about the natural world, perhaps even to control it; how we learned to communicate with, understand, and live alongside our fellow beings; how we've fought with one another for dominance; how we've sought to find privacy in an increasingly noisy world; and how we've struggled with our emotions and our sanity.

Oratory in ancient Rome was important not just for the words spoken but for the sounds made—the tone, the cadence, the pitch of the voice—how that voice might have been transformed by the environment in which it was heard and how the audience might have responded to it. For the Native American tribes first encountering the European colonists, to lose one's voice was to lose oneself. In order to dominate the Native Americans, European colonists went to great effort to silence them, to replace their "demonic" "roars" with the more familiar "bugles, speaking trumpets, and gongs."

Breaking up the history of sound into prehistoric noise, the age of oratory, the sounds of religion, the sounds of power and revolt, the rise of machines, and what he calls our "amplified age," Hendy teases out continuities and breaches in our long relationship with sound in order to bring new meaning to the human story.