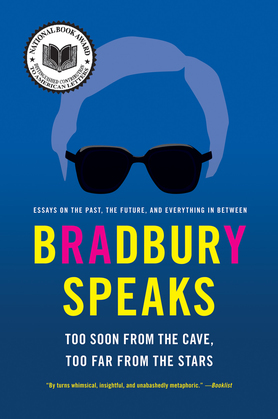 He is an American treasure; a clear-eyed fantasist without peer; a literary icon who has created wonder for the better part of seven decades. He has a moon crater named after him and a star on Hollywood Boulevard's Walk of Fame. He has been showered with accolades and honored with prizes galore, everything from an Emmy Award to the National Book Foundation Medal for Distinguished Contribution to American Letters. He has inspired generations of readers to dream, think, invent, believe, and fly. When Ray Bradbury speaks, it pays dividends in gold to everyone who listens.

Collected between these covers are memories, ruminations, opinions, prophecies, and philosophies from one of the most influential and admired writers of our time: indelible boyhood experiences that molded the man, as well as his eye-opening, sometimes hilarious true adventures in the realm of the famous and adored; insightful, piquant, often biting, always fascinating reflections on humankind's past and future, and where we stand in the universe today; provocative and deeply affecting musings on the present state of art and the unparalleled glory of creation.

As unique, unabashed, and irrepressible as the artist himself, here is an intimate portrait, painted with the master's own words, of the one and only Bradbury -- far more revealing than any mere memoir, for it opens windows not only into his life and work, but into his mind and heart as well.

Ray Bradbury has something wonderful to say.