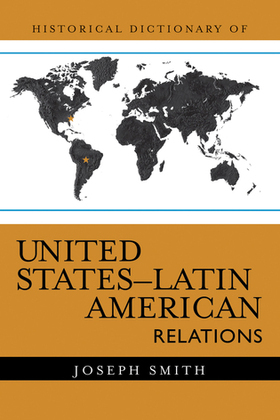 From the assertion of the Monroe Doctrine in 1823 to the Reagan Doctrine of the 1980s, the United States has presumed a position of political leadership and pre-eminence in the Western Hemisphere. This has been made possible by two main factors: America's huge economy, which has made the U.S. the largest single commercial market and the biggest investor in Latin America, and America's military prowess, which has been convincingly demonstrated in victories in the Mexican-American War (1846-1848) and the Spanish-American War (1898). This volume concentrates on the history of diplomatic relations between the U.S. and the nations of Latin America from the creation of the independent United States in the late eighteenth century up to the present. This is accomplished through a chronology, an introduction, a bibliography, appendixes, and hundreds of cross-referenced dictionary entries on the countries involved, significant events, major crises, important figures, controversial issues, and doctrines and policies that have evolved. For scholars, historians, and students interested in the diplomacy of these two regions, the Historical Dictionary of United States-Latin American Relations is an essential reference.