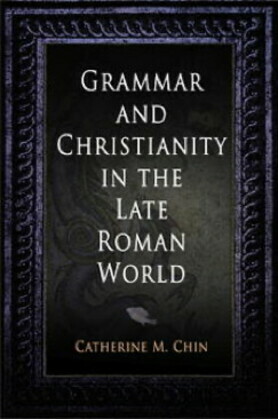 Grammar and Christianity in the Late Roman World

Between the years 350 and 500 a large body of Latin artes grammaticae emerged, educational texts outlining the study of Latin grammar and attempting a systematic discussion of correct Latin usage. These texts—the most complete of which are attributed to Donatus, Charisius, Servius, Diomedes, Pompeius, and Priscian—have long been studied as documents in the history of linguistic theory and literary scholarship. In Grammar and Christianity in the Late Roman World, Catherine Chin instead finds within them an opportunity to probe the connections between religious ideology and literary culture in the later Roman Empire.

To Chin, the production and use of these texts played a decisive role both in the construction of a pre-Christian classical culture and in the construction of Christianity as a religious entity bound to a religious text. In exploring themes of utopian writing, pedagogical violence, and the narration of the self, the book describes the multiple ways literary education contributed to the idea that the Roman Empire and its inhabitants were capable of converting from one culture to another, from classical to Christian. The study thus reexamines the tensions between these two idealized cultures in antiquity by suggesting that, on a literary level, they were produced simultaneously through reading and writing techniques that were common across the empire.

In bringing together and reevaluating fundamental topics from the fields of religious studies, classics, education, and literary criticism, Grammar and Christianity in the Late Roman World offers readers from these disciplines the opportunity to reconsider the basic conditions under which religions and cultures interact.