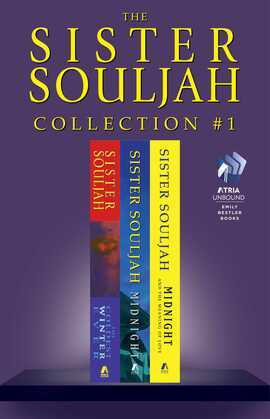 The Sister Souljah Collection #1: The Coldest Winter Ever; Midnight, A Gangster Love Story; and Midnight and the Meaning of Love

In Volume I of this special collectors? edition, visit the first three unforgettable novels by New York Times bestselling author Sister Souljah: The Coldest Winter Ever, Midnight: A Gangster Love Story, and Midnight and the Meaning of Love.

THE COLDEST WINTER EVER
In The Coldest Winter Ever, internationally known author, activist, and hip-hop artist Sister Souljah brought the streets of New York to life in a powerful and unforgettable first novel. Beautifully written, raw, and authentic, this novel firmly established Sister Souljah as the mother of all contemporary urban literature and the author of the first classic of the genre.

MIDNIGHT: A GANGSTER LOVE STORY
Sister Souljah, the hip-hop generation's number one author and most compelling storyteller, delivers a powerful story about love and loyalty, strength and family. In her bestselling novel The Coldest Winter Ever, Sister Souljah introduced the world to Midnight, a brave but humble lieutenant to a prominent underworld businessman. Now, in a highly anticipated follow-up to her million-selling masterpiece, she brings readers into the life and dangerously close to the heart of this silent, fearless young man.

MIDNIGHT AND THE MEANING OF LOVE
Sister Souljah, the New York Times bestselling author of The Coldest Winter Ever and Midnight, delivers her most compelling and enlightening story yet. With Midnight and The Meaning of Love, Souljah brings to her millions of fans an adventure about young, deep love, the ways in which people across the world express their love, and the lengths that they will go to have it.