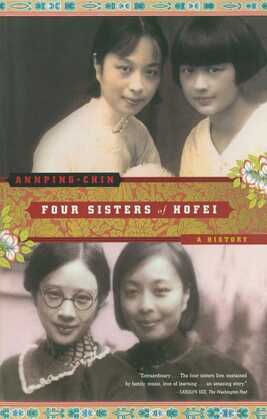 Four Sisters of Hofei: A History

Four Sisters of Hofei is an intimate encounter with Chinese history, told through the collective memory and stories of four sisters born between 1908 and 1924, and with the benefit of the extraordinary knowledge of Yale historian Annping Chin.

Now in their late eighties and early nineties, the Chang sisters lived through a century of historic change in China. In this extraordinary work, assembled with the benefit of letter, diaries, family histories, poetry, journals, and interviews, Annping Chin shapes the story of this family into a riveting chronicle that provides uncanny insight into the old China and its transition to the new.

From their father, the Chang sister inherited reason and a belief in the virtues of modern education. From their mother they learned about the human spirit and the art of finding an appropriate path. Their nurse-nannies -- uneducated widows from the Hofei countryside -- contributed their own traditional beliefs and opinions on modern ways. As the sisters grew up, one broke with tradition to marry an actor, one survived the most violent political years of Communist rule, one married one of China's greatest novelists, and one, raised separately by her devout Buddhist great-aunt, was taught to be a rigorous practitioner of China's classical arts.

The Chang sisters' prolific correspondence provides a rare glimpse of private life in China during the twentieth century, as well as a chronicle of the country from prosperity to persecution, from foreign wars to Cultural Revolution. In Chin's expert prose, Four Sisters of Hofei is an intensely person story that illustrates the complex history of a complex land.