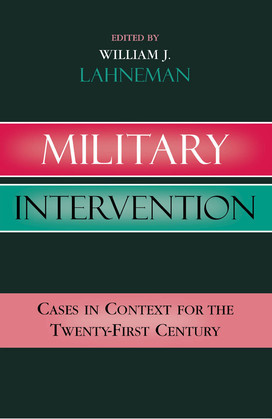 Military Intervention: Cases in Context for the Twenty-First Century

Internal conflict continues to be the most common form of organized violence, most often occurring in a so-called 'arc of instability' comprised of Africa, the Middle East, Central Asia, and Southeast Asia. The misery and death caused by these conflicts, with helpless civilians often victims, has resulted in states and coalitions of states intervening militarily to stop the bloodshed, giving rise to many difficult issues. When should states perform military intervention? How should it be conducted? Is intervention a tactic that can be executed exclusive of other considerations or must it be part of a wider strategy? What makes it a success? And when can occupying troops return home? Military Intervention: Cases in Context for the Twenty-First Century strives to answer these and other questions by comparing and contrasting both the theory and practice of military intervention. It thoroughly reviews the literature and derives a set of guidelines for initiating, conducting, and terminating this complex undertaking. It then evaluates the validity of these guidelines by analyzing the recent cases of Somalia, Bosnia, Rwanda, Haiti, Cambodia, East Timor, and Sierra Leone. The volume concludes with lessons on the why, when, and how of conducting a military intervention and offers recommendations for Afghanistan and Iraq.