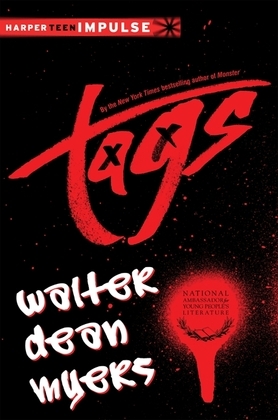 From Walter Dean Myers, the New York Times bestselling author of Monster, comes this 20-page one-act play. Tags is a look at life and death in New York City, complete with a shocking end.

Four New York City teens are shot down in the prime of life. They move through limbo, re-creating their distinctive tags in a Harlem walk-up so that they can "live" forever. But what's the point? How can you think of living forever if you're already dead?

Walter Dean Myers was the New York Times bestselling author of Monster, the winner of the first Michael L. Printz Award; a former National Ambassador for Young People's Literature; and an inaugural NYC Literary Honoree. Myers received every single major award in the field of children's literature. He was the author of two Newbery Honor Books and six Coretta Scott King Awardees. He was the recipient of the Margaret A. Edwards Award for lifetime achievement in writing for young adults, a three-time National Book Award Finalist, as well as the first-ever recipient of the Coretta Scott King–Virginia Hamilton Award for Lifetime Achievement.

Epic Reads Impulse is a digital imprint with new releases each month.