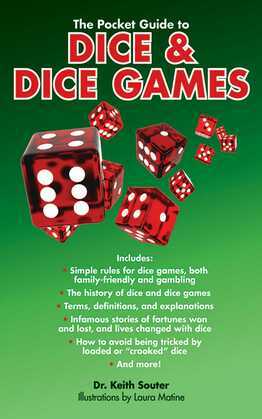 Dice games have been played for centuries and are a staple of the playground, board games, and casinos alike. This pocket guide spans the history of dice and offers clear explanations of popular dice games, including farkle (played since the Middle Ages), Gluckhaus (a German game of fortune, played since the medieval era), craps, and Jacks! This guide also includes tips on winning and how to avoid being tricked by loaded or ?crooked? dice.

Famous dice players, such as the Roman emperors Augustus and Caligula, lost money playing dice and quickly stole other people?s to continue their gaming sprees. In the early nineteenth century, fortunes could be won and lost at the roll of a die and it was not only money which was gambled away, but estates and even marriages. Full of fascinating facts and useful tips, this is a must-read book for everyone interested in family fun, games, gambling, or social history.

Did you know?
Dice derives from the Latin datum, meaning ?ought to be played?
The black marks showing the numbers are called pips
Dice were first played in India around 3000 bc
Dice were originally made from bones, including knuckle and ankle bones
Traditionally cubed, dice also come in other geometric shapes, incuding the zocchihedron, the 100-sided die, and the deltoidal icositetrahedron, where each side is shaped like a kite