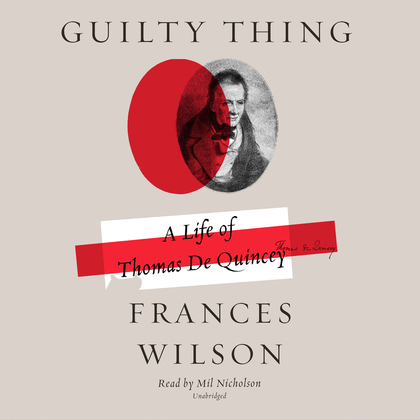 by Frances Wilson (Author), Mil Nicholson (Narrateur)
Excerpt
Nonfiction Biography & autobiography Literary
warning_amber
One or more licenses for this book have been acquired by your organisation details
AUDIOBOOK
Unlimited loans, One at a time
Details

Thomas De Quincey—opium eater, celebrity journalist, and professional doppelgänger—is embedded in our culture. Modeling his character on Coleridge and his sensibility on Wordsworth, De Quincey took over the latter’s cottage in Grasmere and turned it into an opium den. There, increasingly detached from the world, he nurtured his growing hatred of his former idols and his obsession with murder as one of the fine arts.

Though De Quincey may never have felt the equal of the giants of romantic literature, the writing style he pioneered—scripted and sculptured emotional memoir—would inspire generations of writers, including Dickens, Dostoevsky, and Virginia Woolf. James Joyce knew whole pages of his work by heart.

As Frances Wilson writes, “Life for De Quincey was either angels ascending on vaults of cloud or vagrants shivering on the city streets.” In this spectacular biography, Wilson’s meticulous scholarship and supple prose tells the riches-to-rags story of a figure of dazzling complexity and originality, whose life was lived on the run yet who came to influence some of the world’s greatest literature. Guilty Thing brings De Quincey and his martyred but wild soul triumphantly to life and firmly establishes Wilson as one of our foremost contemporary biographers.