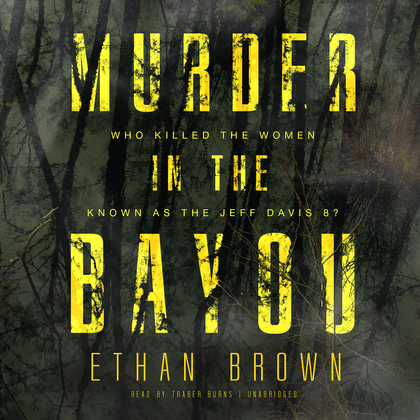 Murder in the Bayou

by Ethan Brown (Author), Traber Burns (Narrateur)
Excerpt
Nonfiction News and investigations True crime
warning_amber
One or more licenses for this book have been acquired by your organisation details
AUDIOBOOK
Unlimited loans, One at a time
Details

An explosive, true-life southern gothic story, Murder in the Bayou chronicles the twists and turns of a high-stakes investigation into the murders of eight women in a troubled Louisiana parish.

Between 2005 and 2009, the bodies of eight women were discovered around the murky canals and crawfish ponds of Jennings, Louisiana, a bayou town of 10,000 in the heart of the Jefferson Davis parish. Local law enforcement officials were quick to pursue a serial killer theory, opening a floodgate of media coverage, from CNN to the New York Times. Collectively the victims became known as the “Jeff Davis 8,” and their lives, their deaths, and the ongoing investigation reveals a small southern community’s most closely guarded secrets.

As Ethan Brown suggests, these homicides were not the work of a single serial killer, but the violent fallout of Jennings’ brutal sex and drug trade, a backwoods underworld hidden in plain sight. Mixing muckraking research and immersive journalism over the course of a five-year investigation, Ethan Brown reviewed thousands of pages of previously unseen homicide files to determine what happened during each victim’s final hours.

Epic in scope and intensely suspenseful, Murder in the Bayou is the story of an American town buckling under the dark forces of poverty, race, and class division—and a lightning rod for justice for the daughters it lost.