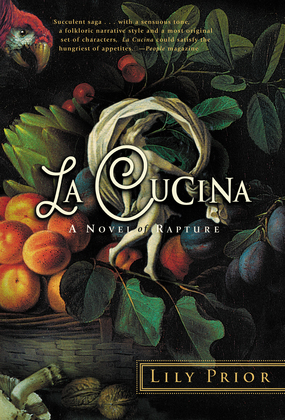 Since childhood, Rosa Fiore -- daughter of a sultry Sicilian matriarch and her hapless husband -- found solace in her family's kitchen. La Cucina, the heart of the family's lush estate, was a place where generations of Fiore women prepared sumptuous feasts and where the drama of extended family life was played out around the age-old table.

When Rosa was a teenager, her own cooking became the stuff of legend in this small community that takes pride in the bounty of its landscape and the eccentricity of its inhabitants. Rosa's infatuation with culinary arts was rivaled only by her passion for a young man, Bartolomeo, who, unfortunately, belonged to another. After their love affair ended in tragedy, Rosa retreated first into her kitchen and then into solitude, as a librarian in Palermo. There she stayed for decades, growing corpulent on her succulent dishes, resigned to a loveless life.

Then, one day, she meets the mysterious chef, known only is I'Inglese, whose research on the heritage of Sicilian cuisine leads him to Rosa's library, and into her heart. They share one sublime summer of discovery, during which I'lnglese awakens the power of Rosa's sensuality, and together they reach new heights of culinary passion. When I'Inglese suddenly vanishes, Rosa returns home to the farm to grieve for the loss of her second love. In the comfort of familiar surroundings, among her, growing family, she discovers the truth about her loved ones and finds her life transformed once more by the magic of her cherished Cucina.

Exuberant and touching, La Cucina is a magical evocation of lifes mysterious seasons and the treasures found in each one. It celebrates family, food, passion, and the eternal rapture of romance.