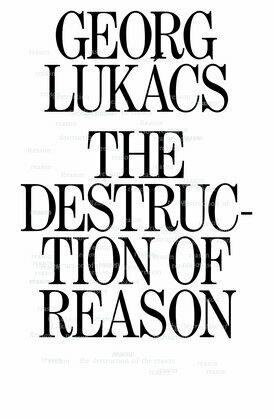 The Destruction of Reason

How Western philosophy lost its innocence: from Enlightenment to fascism

The Destruction of Reason is Georg Lukács’s trenchant criticism of certain strands of philosophy after Marx and the role they played in the rise of National Socialism: ‘Germany’s path to Hitler in the sphere of philosophy,’ as he put it. Starting with the revolutions of 1848, his analysis spans post-Hegelian philosophy and sociology.

The great pessimist Arthur Schopenhauer, neo-Hegelians such as Leopold von Ranke and Wilhelm Dilthey, and the phenomenologists Edmund Husserl, Karl Jaspers, and Jean-Paul Sartre come in for a share of criticism, but the principal targets are Friedrich Nietzsche and Martin Heidegger. Through these thinkers he shows in an unsparing analysis that, with almost no exceptions, the post-Hegelian tradition prepared the ground for fascist thought.

Originally published in 1952, the book has been unjustly overlooked despite its centrality in Lukács’s work and its being one of the key texts in Western Marxism. This new edition features a historical introduction by Enzo Traverso, addressing the current rise of the far right across the world today.