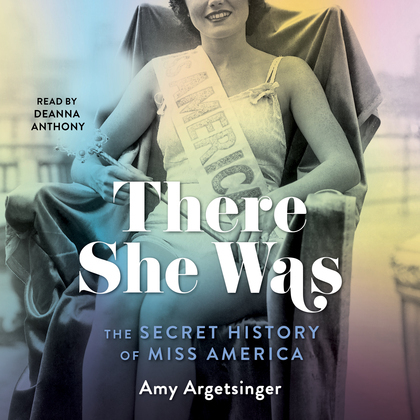 by Amy Argetsinger (Author), Deanna Anthony (Narrateur)
Excerpt
Nonfiction History >1989 Social science Sociology
warning_amber
One or more licenses for this book have been acquired by your organisation details
AUDIOBOOK
Unlimited loans, 2 years, One at a time
Details

“Argetsinger...is a true pageant enthusiast; she brings empathy and respect to the women who have followed this path.” —The Washington Post

A Washington Post Style editor’s fascinating and irresistible look back on the Miss America pageant as it approaches its 100th anniversary.

The sash. The tears. The glittering crown. And of course, that soaring song. For all of its pomp and kitsch, the Miss America pageant is indelibly written into the American story of the past century. From its giddy origins as a summer’s-end tourist draw in Prohibition-era Atlantic City, it blossomed into a televised extravaganza that drew tens of millions of viewers in its heyday and was once considered the highest honor that a young woman could achieve.

For two years, Washington Post reporter and editor Amy Argetsinger visited pageants and interviewed former winners and contestants to unveil the hidden world of this iconic institution. There She Was spotlights how the pageant survived decades of social and cultural change, collided with a women’s liberation movement that sought to abolish it, and redefined itself alongside evolving ideas about feminism.

For its superstars—Phyllis George, Vanessa Williams, Gretchen Carlson—and for those who never became household names, Miss America was a platform for women to exercise their ambitions and learn brutal lessons about the culture of fame. Spirited and revelatory, There She Was charts the evolution of the American woman, from the Miss America catapulted into advocacy after she was exposed as a survivor of domestic violence to the one who used her crown to launch a congressional campaign; from a 1930s winner who ran away on the night of her crowning to a present-day rock guitarist carving out her place in this world. Argetsinger dissects the scandals and financial turmoil that have repeatedly threatened to kill the pageant—and highlights the unexpected sisterhood of Miss Americas fighting to keep it alive.