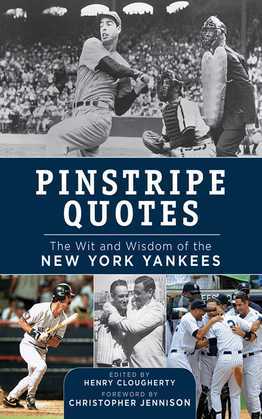 Was it Babe Ruth who said it best when he once remarked, “Baseball was, is, and always will be to me the best game in the world”? Or Mickey Mantle when he channeled Lou Gehrig during his 1969 farewell address: “I never knew how someone dying could say he was the luckiest man in the world. But now I understand”? Since the New York Highlanders became the New York Yankees in 1913, this dynamic franchise has captured the hearts and minds of fans across the nation. But for all the glory garnered by the men in pinstripes, their advice, wisdom, and passion has never been given a voice until now.

Pinstripe Quotes is a unique collection of quotes, stories, and historic anecdotes as spoken by the players themselves, and the men and women who knew them best. Where else will fans learn Lou Gehrig’s thoughts on racial discrimination, or Derek Jeter’s penchant for singing out loud when no one else is around? What Yankees fan won’t relish reliving the team’s first World Series victory through the eyes of the sportswriters and cheering crowds who were there? A franchise with over a century of triumph, tragedy, and unflinching determination, the players of the New York Yankees have the sayings and words of wisdom that will carry fans through anything—from a rough day at work, to the best way to celebrate a World Series victory. Without a doubt, Pinstripe Quotes is a must-have for any fan.