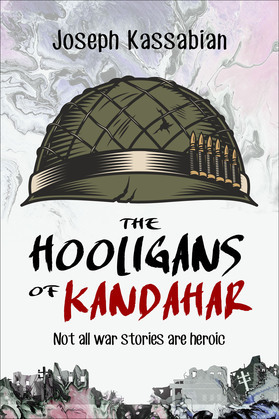 The Hooligans of Kandahar

by Joseph Kassabian (Author)
Excerpt
Nonfiction Biography & autobiography Military Personal memoirs Nature, recreation and sports Antiques & collectibles Military Afghan War (2001-)
warning_amber
One or more licenses for this book have been acquired by your organisation details
EPUB
Unlimited loans, One at a time
Details
An Army combat veteran’s personal account of his time in service during the Afghan War with an unconventional squad.

In the birthplace of the Taliban, some men lose their lives, some lose their sanity, and others their humanity. They are the Hooligans . . .

During the peak of the Afghanistan War, a group of soldiers is dropped by helicopter into the remote mountains outside of Kandahar City. Mismanaged and overlooked by command, the squad must rely on each other to survive.

Their mission is to train and advise the Afghan National Police and help rebuild the country of Afghanistan. The Afghan Police station they are assigned to live in is dangerous health hazard. Many of the police officers they are supposed to train are Taliban sleeper agents or the family of Taliban fighters. The ones that aren’t are often addicted to drugs, illiterate, or smuggling child slaves.

The squad’s leader is Slim, a staff sergeant in his late twenties with so many mental health issues that his insanity is his most dominant personality trait. An alcoholic with a penchant for violent outbursts against both his own soldiers and the Afghans, he is more comfortable at war than at home.

Joseph Kassabian is the youngest and most junior fire team leader in the squad. He’s charged with leading a team of soldiers not even old enough to drink. He himself is only 21 years old. As a combat veteran from previous deployments with four years in the Army, he assumes he has seen it all. But he has no idea how bad things can get in war-torn Kandahar . . .

Humorous and grim yet honest, The Hooligans of Kandahar is Jarhead and The Hurt Locker meets I Hope They Serve Beer in Hell and Fear and Loathing in Las Vegas.

Winner of the 2017 eLit Awards Gold Medal in Current Events

Praise for The Hooligans of Kandahar

“A frighteningly realistic snapshot of the current war. Mr. Kassabian paints a deeply moving portrait of the struggles faced by men and women in uniform caused by our current foreign policy (or lack thereof), while bringing us along for a horrific, often . . . hilarious ride through the life of an American soldier.” —William Fulton, author of the critically acclaimed book The Blood of Patriots, Hill vets 100 awardee, SME/Consultant Domestic Terrorism
Publication date
August 17, 2021
Publisher
Tck Publishing
Page count
258
ISBN
9781631610912
Paper ISBN
9781631610493