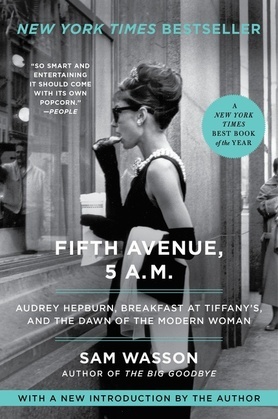 With a cast of characters that includes Audrey Hepburn, Truman Capote, and Gerald Clarke, this book offers a slice of social history seen through the lens of one of America’s most iconic films

The images of Breakfast at Tiffany’s are branded into our collective memory: we can see Audrey Hepburn stepping out of that cab on the corner of 57th and 5th, and we can picture her again with George Peppard, huddled in an alleyway and wrapped in a kiss, as the rain pours down around them. Those moments are as familiar to us as any in whole the history of movies, but few of us know that that ending was not the film’s original ending. In fact, it was only one of two endings the filmmakers shot—and it almost didn’t make it in.

The reasons why have to do with Tiffany’s cutting-edge take on sex in the city, namely, when to show it, and how to do it, without getting caught. If Truman Capote had it his way, his beloved Marilyn Monroe would have been cast as Holly, but crafty executives knew that she’d have the censors on red alert. So they went for Audrey. But would she go for them? Frightened at the prospect of playing a part so far beyond her accepted range—not to mention the part of call girl—Audrey turned inside out worrying if she should take her agent’s advice and accept the role. What would people think? America’s princess playing a New York bad girl? It seemed just too far…

The First Little Black Dress is the first ever complete account of the making of Breakfast at Tiffany’s. Drawing upon countless interviews with those involved in the film’s production, from actors to producer Richard Shepherd to Gerald Clarke, Capote’s biographer, Wasson brings us inside the world and indeed inside the mind of one of America’s greatest cinematic icons.

Wasson immerses us in the America of the late fifties, before Woodstock and birth control, when a not-so-virginal girl by the name of Holly Golightly raised eyebrows across the nation, changing fashion, film, and sex, for good. But that was the easy part. Getting Audrey there—and getting the right people behind her—that was the tough part.

With the heart of a novelist and the eye of a critic, Wasson delivers us from the penthouses of the Upper East Side to the pools of Beverly Hills, from script to screen and from rehearsal to “Action!” The First Little Black Dress presents Breakfast at Tiffany’s as we have never seen it before—through the eyes of those who made it.