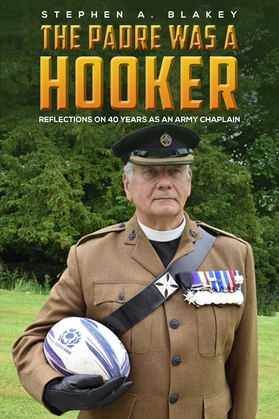 The Padre was a Hooker

The commandment “Thou shalt not kill,” would seem to make it unlikely that a committed Christian would ever choose to pursue a career in the armed forces, where killing the enemy is, at the very least, a real possibility.
Becoming an army chaplain might well be seen as an even more astonishing choice for someone seeking to serve God.
And yet, the British armed forces have had chaplains since the beginning of warfare itself. Men and women from the traditional established churches who accompany the troops into the very face of the foe, seeking to care for the spiritual and moral welfare of the troops.
Despite all the changes in the society and warfare, the decrease in church attendance and the weakening of the spiritual profile of our nation, military leaders still want a padre to accompany them into action.
For 40 years, Stephen Blakey was one of these padres. With humour and insight, he shares the joys and the struggles of being the ‘man of God’ amongst what is sometime a pretty ungodly community.