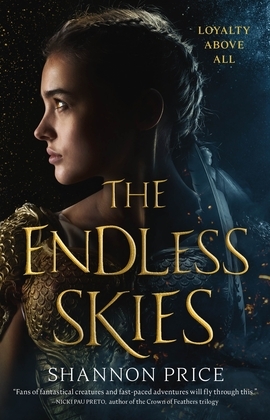 by Shannon Price (Author)
Excerpt
Fiction Juvenile & young adult Fantasy, magic Young adult
warning_amber
One or more licenses for this book have been acquired by your organisation details
EPUB
Unlimited loans, 2 years, One at a time
Details

Shannon Price's The Endless Skies is a breakout standalone epic fantasy about shapeshifting warriors perfect for fans of Adrienne Young and Wonder Woman.

High above the sea, floats the pristine city of the Heliana. Home to winged-lion shapeshifters—the Leonodai—and protected from the world of humans by an elite group of warriors, the Heliana has only known peace.

After years of brutal training, seventeen-year-old Rowan is ready to prove her loyalty to the city and her people to become one of the Leonodai warriors. But before Rowan can take the oath, a deadly disease strikes the city’s children. Soon the warriors—including two of Rowan’s closest friends—are sent on a dangerous mission to find a fabled panacea deep within enemy lands.

Left behind, Rowan learns a devastating truth that could compromise the mission and the fate of the Heliana itself. She must make a decision: stay with the city and become a warrior like she always dreamed, or risk her future in an attempt to save everyone she loves. Whatever Rowan decides, she has to do it fast, because time is running out, and peace can only last so long...