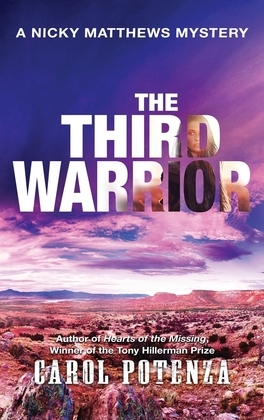 by Carol Potenza (Author)
Excerpt
Fiction Mystery & detective Police procedural Women sleuths
warning_amber
One or more licenses for this book have been acquired by your organisation details
EPUB
Unlimited loans, One at a time
Details

When Fire-Sky Pueblo Police Sergeant Nicky Matthews is guided by an eerie spirit to the body of a missing cowboy, it should've been a cut and dry case-the New Mexico summer heat must have driven the poor guy to cool off in an isolated water tank with tragic consequences. But as Nicky investigates the cowboy's erratic last days, his death turns more and more sinister.

Someone in the Fire-Sky police department is warning Albuquerque's most vicious drug gang of undercover operations on the Pueblo. Begging Nicky to help him find the snitch, her former lover-and New Mexico State Police Chief-barrels back into her life, endangering her growing relationship with Conservation Agent Franco Martinez. But when the trail leads back to her best friend, Nicky is torn between her loyalties and her job.

The two investigations collide as fires erupt on and off the Pueblo. With the tension, heat, and body count rising, Nicky's actions take a reckless and dangerous turn, her behavior and emotions driven by elements outside of her control. She soon realizes the spirit who led her to the first body only appears to those about to die.

And lately, she's seen him a lot.