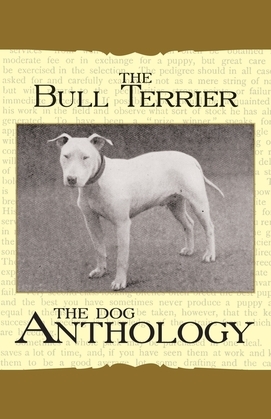 THE BULL TERRIER - A DOG ANTHOLOGY gathers together all the best early writing on the breed from our library of scarce, out-of-print antiquarian books and documents and reprints it in a quality, modern edition. This anthology includes chapters taken from each of the following books, all of them written by renowned breed experts of their day. All of the original photos and illustrations are also reproduced. Contains Chapters From: A History and Description of the Modern Dogs of Great Britain and Ireland. The Terriers. First published London 1894. - The author of this three title was Rawdon B. Lee. He was well known as the editor of "The Field," and also author of the histories of "The Fox Terrier," "The Collie," and other important dog books. The three volumes were devoted to every breed of dog found in Great Britain and Ireland. Every aspect of their history, breeding and management is discussed in great detail. A particular feature of these books were the numerous detailed full page drawings by the famous dog artist Arthur Wardle, which are reproduced here in fine detail. THE DOG BOOK By James Watson - First published in London, 1906, in two volumes and limited numbers. Now a rare and much sought after work. Its full title is "A Popular History of the Dog, with Practical Information as to Care and Management of House, Kennel, and Exhibition Dogs; and Descriptions of All the Important Breeds. In Ten Parts." The contents were well illustrated with numerous photographs of leading and famous dogs of that era. James Watson was a renowned authority on all dog breeds and his knowledge is imparted in great detail throughout this famous book. Also, THE ILLUSTRATED BOOK OF THE DOG By Vero Shaw - This rare and desirable work was first published in parts over the years 1879 - 1881 and thoroughly described every aspect of over sixty breeds of dogs. Vero Shaw was a leading authority and editor of dog books and periodicals in the late nineteenth century, but this particular comprehensive work stands as a final testimony to his immense knowledge of the subject. Each breed was discussed in detail. Their physical points, temperaments,, and special abilities are given; celebrated dogs are discussed and pictured; and the history of the breed and pedigrees of famous champions are also provided. This classic work strongly influenced the direction of dog breeding in its time and for decades after.

British Terriers: Their Breeding, Management, and Training for Show or Work. By J. Maxtee. This important early work on British Terriers was first published in London, 1909. John Maxtee was the author of this and other dog breed books, and was also editor of "The Fox Terrier," "The Greyhound," and "The Collie." His "British Terriers" contained two separate divisions - English and Welsh and Scotch and Irish. Some nineteen breeds of terrier were discussed in detail and the book contained many photographs of famous examples of each breed. Also, BRITISH DOGS - THE VARIOUS BREEDS. THE POINTS, SELECTION, SPECIAL TRAINING & MANAGEMENT, AND SHOW PREPARATION By W. D. Drury with contributions from numerous authorities. Originally published in two volumes in 1888, but a new edition of 1903 encompassed both volumes. It discusses in great detail over sixty dog breeds with many photographs and other illustrations. The chapters are penned by experts on the particular breeds and this book is now considered one of the finest reference works in the English language. The Twentieth Century Dog (Non - Sporting) and its companion volume The Twentieth Century Dog (Sporting) Edited by Herbert Compton. These two well illustrated volumes were first published in London 1904 and were compiled from the contributions of over five hundred experts. The editor first gleaned the professional views of dog judges, dog breeders and dog exhibitors by distributing over two thousand questionnaires to gain the information set out in these two leading dog books.