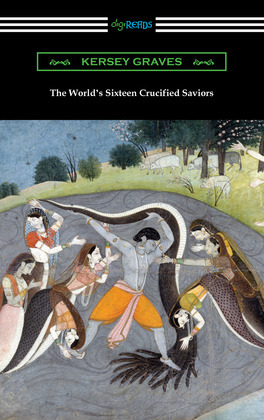 The World's Sixteen Crucified Saviors: or, Christianity Before Christ

by Kersey Graves (Author)
Excerpt
Nonfiction Religion
warning_amber
One or more licenses for this book have been acquired by your organisation details
EPUB
Unlimited loans, One at a time
Details

The complete title of this work, “The World’s Sixteen Crucified Saviors; Or, Christianity Before Christ, Containing New, Startling, and Extraordinary Revelations in Religious History, which Disclose the Oriental Origin of All the Doctrines, Principles, Precepts, and Miracles of the Christian New Testament, and Furnishing a Key for Unlocking Many of Its Sacred Mysteries, Besides Comprising the History of 16 Heathen Crucified Gods”, gives a great insight into the content contained within. First published in 1875, Kersey Graves’ “The World’s Sixteen Crucified Saviors” is a controversial work that asserts the belief that Jesus Christ was not an actual person, but rather a composite of earlier mythological stories. Graves cites the stories of Thulis of Egypt, Krishna of India, Crite of Chaldea, Atys of Phrygia, Thammuz or Tammuz of Syria, Hesus or Eros, Bali of Orissa, Indra of Tibet, Iao of Nepal, Buddha Sakia (Muni) of India, Mithra of Persia, Alcestos of Euripides, Quezalcoatl of Mexico, Wittoba of the Bilingonese, Prometheus or Aeschylus of Caucasus, and Quirinus of Rome, as examples of crucifixion stories that parallel the Christ narrative. While criticized by some as being incomplete and poorly cited, “The World’s Sixteen Crucified Saviors” is acknowledged by notable atheists as an important work, which challenges the Biblical representation of Jesus Christ.