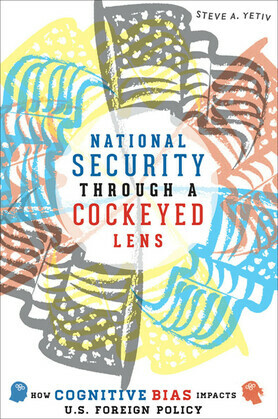 National Security Through a Cockeyed Lens

Author Steve A. Yetiv draws on four decades of psychological, historical, and political science research on cognitive biases to illuminate some of the key pitfalls in our leaders’ decision-making processes and some of the mental errors we make in perceiving ourselves and the world.

Tracing five U.S. national security episodes?the 1979 Soviet invasion and occupation of Afghanistan; the Iran-Contra affair during the Reagan administration; the rise of al-Qaeda, leading to the 9/11 attacks; the 2003 U.S. invasion of Iraq; and the development of U.S. energy policy?Yetiv reveals how a dozen cognitive biases have been more influential in impacting U.S. national security than commonly believed or understood.

Identifying a primary bias in each episode?disconnect of perception versus reality, tunnel vision (“focus feature”), distorted perception (“cockeyed lens”), overconfidence, and short-term thinking?Yetiv explains how each bias drove the decision-making process and what the outcomes were for the various actors. His concluding chapter examines a range of debiasing techniques, exploring how they can improve decision making.

Praise for National Security through a Cockeyed Lens

“Yetiv’s volume could be one of the key books for presidents and their advisers to read before they begin making decisions.” —William W. Newmann, H-Diplo