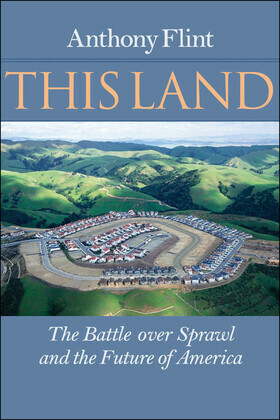 Americans are spreading out more than ever—into “exurbs” and “boomburbs” miles from anywhere, where big subdivisions offer big houses. We cling to the notion of safer neighborhoods and better schools, but what we get are longer commutes, higher taxes, and a landscape of strip malls and office parks.

The subdivisions and extra-wide roadways are encroaching into the wetlands of Florida, ranchlands in Texas, and the desert outside Phoenix and Las Vegas. But with up to 120 million more people in the country by 2050, will the spread-out pattern cave in on itself? Could Americans embrace a new approach to development?

In This Land, veteran journalist and Harvard scholar Anthony Flint tells the untold story of development in America. It is the story of a burgeoning anti-sprawl movement, a 1960s-style revolution of New Urbanism, smart growth, and green building. And it is the story of landowners fighting back on the basis of property rights, with free-market libertarians, homebuilders, road pavers, financial institutions, and even the lawn-care industry right alongside them.
Publication date
April 27, 2021
Publisher
Johns Hopkins University Press
Page count
380
ISBN
9780801889172
Paper ISBN
9781421407814
File size
8 MB