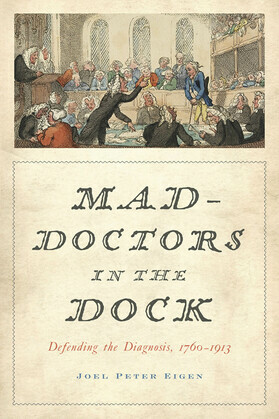 Mad-Doctors in the Dock

by Joel Peter Eigen (Author)
Excerpt
Nonfiction Law Rights transverse Criminal History of law Human science Psychology Forensic psychology Social science Criminology
warning_amber
One or more licenses for this book have been acquired by your organisation details
EPUB
Unlimited loans, One at a time
Details
“Detailed courtroom narratives . . . give us a colorful and gripping sense of the life-and-death maneuvers involved in mounting an insanity defense.” —Andrew Scull, author of Madness in Civilization

Shortly before she pushed her infant daughter headfirst into a bucket of water and fastened the lid, Annie Cherry warmed the pail because, as she later explained to a police officer, “It would have been cruel to put her in cold water.” Afterwards, this mother sat down and poured herself a cup of tea. At Cherry’s trial at the Old Bailey in 1877, Henry Charlton Bastian, physician to the National Hospital for the Paralyzed and Epileptic, focused his testimony on her preternatural calm following the drowning. Like many other late Victorian medical men, Bastian believed that the mother’s act and her subsequent behavior indicated homicidal mania, a novel species of madness that challenged the law’s criterion for assigning criminal culpability.

How did Dr. Bastian and his cohort of London’s physicians, surgeons, and apothecaries—originally known as “mad-doctors”—arrive at such an innovative diagnosis, and how did they defend it in court? Mad-Doctors in the Dock is a sophisticated exploration of the history of the insanity defense in the English courtroom from the middle of the eighteenth century to the early twentieth century. Joel Peter Eigen examines courtroom testimony offered in nearly 1,000insanity trials, transporting us into the world of psychiatric diagnosis and criminal justice. The first comprehensive account of how medical insight and folk psychology met in the courtroom, this book makes clear the tragedy of the crimes, the spectacle of the trials, and the consequences of the diagnosis for the emerging field of forensic psychiatry.
Publication date
April 27, 2021
Publisher
Johns Hopkins University Press
Page count
224
ISBN
9781421420493
Paper ISBN
9781421420486
File size
1 MB