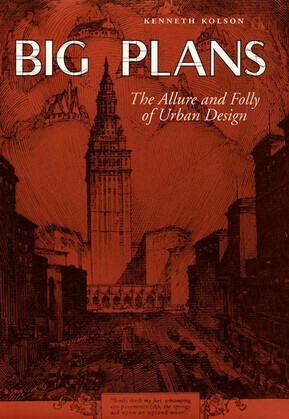 “Similar in spirit to Lewis Mumford’s The City in History and Jane Jacobs’ The Death and Life of Great American Cities . . . wonderful, funny, idiosyncratic.” —Frederick R. Steiner, author of The Living Landscape

Big Plans: The Allure and Folly of Urban Design springs from the idea that human aspirations for the city tend to overstate the role of rationality in public life. Inspired by the architectural and urban criticism of such writers as Lewis Mumford, Jane Jacobs, and John Brinckerhoff Jackson, Kolson adopts a user’s perspective on issues of urban design, an approach that highlights both the futility of social engineering and the resilience of the human spirit.

“A book that should be read by all those people, and there seem to be more of them as week chases week, who are thinking about the fate of lower Manhattan right now.” —Bloomberg News

“Kenneth Kolson has lots of material: Some of what’s been built in cities lately is astonishing and not in a good way.” —The Boston Globe

“Kolson is a passionate critic of urban schemes, with well-founded skepticism about the role rationality has played in designing them.” —Journal of the Society of Architectural Historians

“A fascinating read about the utopian goal of Big Plans and the dystopian reality of lived experience.” —Design Issues