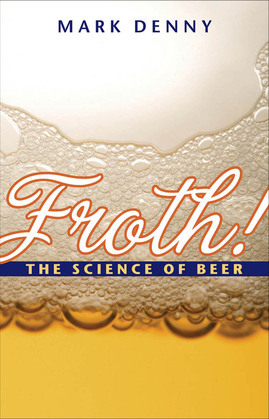 “A theoretical physicist’s exploration of the math and science behind the beer-brewing process. Packed with humor, history, and DIY enthusiasm.” —Seed Magazine

Ever wonder where the bubbles in your beer came from, which way they are going, and why? Have you considered the physical differences among ales, lambics, and lagers? Do you contemplate your pint?

Accomplished homebrewer and physicist Mark Denny has crafted a scientifically sound and witty investigation of the physics and chemistry of beer. He recounts and explains the history of and key technological advances in brewing, provides basic instructions for making your own—including a scientific-yet-accessible account of the changes in appearance during each stage of the process—and looks at the fascinating physical phenomena contained within a pint of beer.

Along the way he defines the main concepts and terms involved in the process and shows how you can subject the technical aspects of brewing to scientific analysis.

If you’ve ever been curious about how beer is made, why it froths so well, and what makes different types . . . well . . . different, then Froth! is for you.

“Froth! earns a solid ‘A’ for bringing science, brewing, and good writing together.” —Beerfestivals.org

“Books about beer tend to be either purely descriptive or wholly scientific. Rarely does a book combine the two, much less with genuine wit and charm. Froth! . . . is the exception. It is a great joy to read and contains a wealth of information for a wide audience . . . Highly recommended.” —Choice