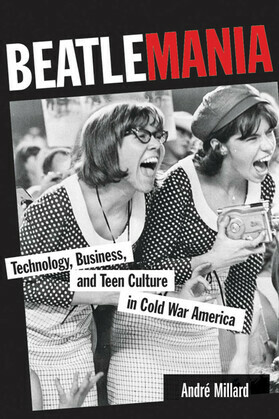 by André Millard (Author)
Excerpt
Nonfiction Arts Music History & criticism Social science Sociology Science and technics Technology & engineering
warning_amber
One or more licenses for this book have been acquired by your organisation details
EPUB
Unlimited loans, One at a time
Details

This look at how changes in the music industry made the Fab Four phenomenon possible “presents a different interpretation of a much-studied topic” (Essays in Economic and Business History).

In this unique study, André Millard argues that, despite the Beatles’ indisputable skill, they would not have attained the same global recognition or been as influential without the convergence of significant developments in the way music was produced, recorded, sold, and consumed.

As the Second Industrial Revolution hit full swing and baby boomers came of age, the reel-to-reel recorder and other technological advances sped the evolution of the music business. Musicians, recording studios and record labels, and music fans used and interacted with music-making and -playing technology in new ways. Higher quality machines made listening to records and the radio an experience that one could easily share with others, even if they weren’t in the same physical space. At the same time, an increase in cross-Atlantic commerce—especially of entertainment products—led to a freer exchange of ideas and styles of expression, notably among the middle and lower classes in the U.S. and the UK. At that point, Millard argues, the Beatles rode their remarkable musicianship and cultural savvy to an unprecedented bond with their fans—and spawned Beatlemania.

Lively and insightful, Beatlemania offers a deeper understanding the days of the Fab Four and the band’s long-term effects on the business and culture of pop music.