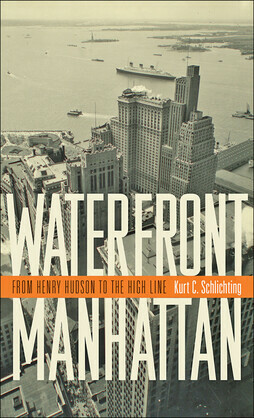 “Rich in historical, sociological, and economic detail . . . a new way to look at the ascendancy and growth of America’s most important city.” —Civil Engineering

With its maritime links across the oceans, along the Atlantic coast, and inland to the Midwest and New England, Manhattan became a global city and home to the world’s busiest port. It was a world of docks, ships, tugboats, and ferries, filled with cargo and freight, a place where millions of immigrants entered the Promised Land.

In Waterfront Manhattan, Kurt C. Schlichting tells the story of the Manhattan waterfront as a struggle between public and private control of New York’s priceless asset. From colonial times until after the Civil War, the city ceded control of the waterfront to private interests, excluding the public entirely and sparking a battle between shipping companies, the railroads, and ferries for access to the waterfront.

In the second half of the nineteenth century, the City of New York regained control of the waterfront, but a whirlwind of forces beyond the control of either public or private interests—technological change in the form of the shipping container and the jet airplane—devastated the city’s maritime world. The city slowly and painfully recovered. Visionaries reimagined the waterfront, and today the island is almost completely surrounded by parkland, the world of piers and longshoremen gone, replaced by luxury housing and tourist attractions.

Waterfront Manhattan is “an impressive narrative which is sure to shed light on this underappreciated aspect of New York City history” (Global Maritime History).

“An important book. There is much to ponder on the future of New York City’s harbor.” —Journal of American History