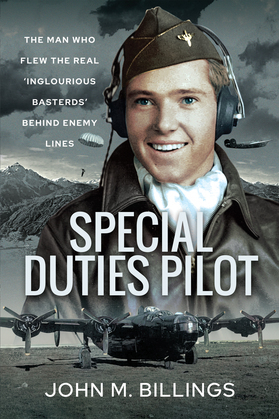 If there was ever a man who was born to fly, it is John M. Billings. He took his first plane ride in 1926, began taking piloting lessons in 1938, and joined the US Army Air Force in July 1942. After training he was assigned to fly Consolidated B-24 Liberator long-range bombers. He joined the 825th Bombardment Squadron of the 484th Bombardment Group. After flying fifteen daylight strategic bombing missions, Billings was selected for assignment to the 885th Bombardment Squadron (Heavy) (Special).

As its designation suggests, the 885th was no regular bombing unit. The 885th specialized in flying top secret, low-altitude missions at night in support of the clandestine operations of the OSS and the Special Operations Executive. The unit’s covert missions included parachuting OSS and SOE agents and supplies deep inside German territory.

The most eventful and dangerous of Billings’ thirty-nine secret missions with the 885th was his assignment in February 1945 to clandestinely insert a three-man OSS team, code-named Greenup, into Austria. The drop zone selected for the Greenup insertion was located on a glacier in a valley surrounded by mountains in the middle of the snow-covered Alps. Billings and his crew finally found the weather in the Alps clear enough to spot the drop zone, slip their unwieldy B-24 between the mountain peaks and descend to an altitude just a few hundred feet above the moonlit snow. On Billings’ signal, the OSS agents parachuted right on target.

The insertion of this OSS team was the inspiration for the feature film Inglorious Bastards. However, Brad Pitt’s vengeful character was far removed from the leader of the Greenup team, Fred Mayer, who achieved success by infiltrating enemy ranks to gain vital intelligence.

After the war, John Billings flew with Trans World Airlines and Eastern Airlines. He also flew more than 300 ‘Angel Flight’ airlift missions which involve the specialized aerial transportation of critically ill medical patients. This is one man’s story of a remarkable lifetime of flying, both in peace and in war.