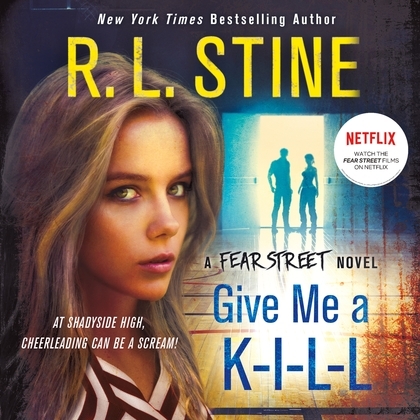 by R. L. Stine (Author), Brittany Pressley (Narrateur)
Excerpt
warning_amber
One or more licenses for this book have been acquired by your organisation details
AUDIOBOOK
Unlimited loans, 2 years, One at a time
Details

Watch the movies, listen to the audiobooks! The Fear Street movies are coming to Netflix this summer!

Generations of children and teens have grown up on R.L. Stine's bestselling and hugely popular horror series, Fear Street and Goosebumps. Now, the Fear Street series is back with a chilling new installment, packed with pure nightmare fodder that will scare Stine's avid fan base of teen listeners and adults. In Give Me a K-I-L-L, Stine brings back his most beloved characters—the cheerleaders of Shadyside High.

At Shadyside High, cheerleading can be a scream!

The cheerleading squad at Shadyside has always been strong, but now there are rumors that lack of funds may mean the end of cheerleading at Shadyside. That would be a shame for Heather Wyatt, who has just transferred from her old school, where she was a star, and is eager to join the squad. There’s only one other girl who stands in her way—rich, spoiled Devra Dalby, who is also trying out for the one open slot. The competition to join the squad is anything but friendly—and it ends in murder. Will Heather make the squad—if there's even a squad anymore—or will she end up dead?

Packed with screams and guaranteed to send a shiver up your spine, Give Me a K-I-L-L is a terrifying installment in Stine's bestselling Fear Street series.