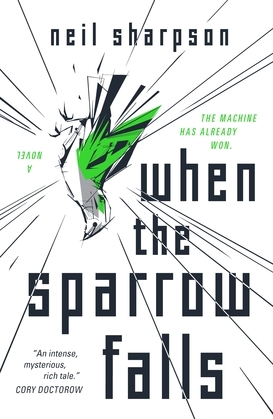 When the Sparrow Falls

Life in the Caspian Republic has taught Agent Nikolai South two rules. Trust No One. And work just hard enough not to make enemies.

Here, in the last sanctuary for the dying embers of the human race in a world run by artificial intelligence, if you stray from the path—your life is forfeit. But when a Party propagandist is killed—and is discovered as a “machine”—he’s given a new mission: chaperone the widow, Lily, who has arrived to claim her husband’s remains.

But when South sees that she, the first “machine” ever allowed into the country, bears an uncanny resemblance to his late wife, he’s thrown into a maelstrom of betrayal, murder, and conspiracy that may bring down the Republic for good.

WHEN THE SPARROW FALLS illuminates authoritarianism, complicity, and identity in the digital age, in a page turning, darkly-funny, frightening and touching story that recalls Philip K. Dick, John le Carré and Kurt Vonnegut in equal measure.