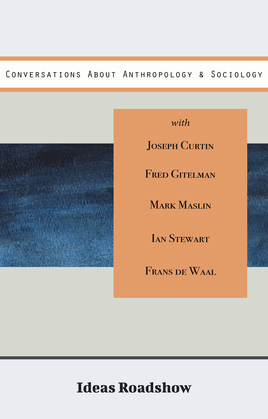 Conversations About Anthropology & Sociology include the following 5 carefully-edited Ideas Roadshow Conversations featuring leading researchers. This collection includes a detailed preface highlighting the connections between the different books. Each book is broken into chapters with a detailed introduction and questions for discussion at the end of each chapter:

1. The Science of Siren Songs: Stradivari Unveiled - A Conversation with master violinmaker, acoustician and MacArthur Fellow Joseph Curtin. This wide-ranging conversation explores Curtin’s long quest to characterize the sound of a Stradivari violin and the rigorous series of double-blind tests he and his colleagues developed to probe whether or not professional musicians can really tell the difference between a Stradivari and a modern violin. This thought-provoking book also examines violin acoustics and how acoustic science can be married to the art of violin making while merging time-honoured techniques with new materials and design.

2. In the Cards - A Conversation with Fred Gitelman, world-champion bridge player and co-founder of Bridge Base Online. This comprehensive conversation provides behind-the-scenes insights into the world of professional bridge, the psychological stress of top-flight competition, how the human mind can compute amazing feats of memory, bridge in schools, coaching Bill Gates and Warren Buffett and more.

3. Embracing the Anthropocene: Managing Human Impact - A Conversation with Mark Maslin, Professor of Geography at University College London. This in-depth conversation explores Mark Maslin’s research on the Anthropocene which according to his definition began when human impacts on the planet irrevocably started to change the course of the Earth’s biological and geographical trajectory, leading to climate change, loss of biodiversity, deforestation, and more.

5. On Atheists and Bonobos - A Conversation with primatologist Frans de Waal, the Charles Howard Candler Professor of Primate Behavior in the Department of Psychology at Emory University and director of the Living Links Center at the Yerkes National Primate Research Center at Emory. Frans de Waal is renowned for his work on the behaviour and social intelligence of primates. This thought-provoking conversation examines fascinating questions such as: Are we born with an innate sense of “the good”? Do we learn from others what is “wrong”? Does religion determine, or is it a result of, morality? and more.