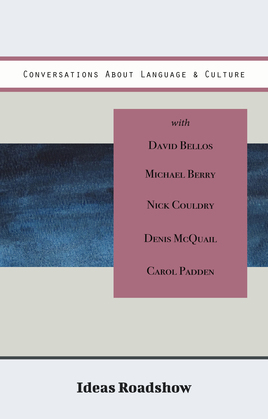 Conversations About Language & Culture includes the following 5 carefully-edited Ideas Roadshow Conversations featuring leading researchers. This collection includes a detailed preface highlighting the connections between the different books. Each book is broken into chapters with a detailed introduction and questions for discussion at the end of each chapter:

1.Babbling Barbarians: How Translators Keep Us Civilized - A Conversation with David Bellos, translator and professor in French literature at Princeton University. This wide-ranging conversation examines many fascinating features of language and translation, including the value of a translation as opposed to the original work, translating humour, the Bergman Effect and more.

2. China, Culturally Speaking - A conversation with Michael Berry, Professor of Contemporary Chinese Cultural Studies at UCLA and a world-renowned Chinese literary translator and film scholar. After discussing the inspiring influence his English teacher had on him, the conversation covers a wide range of topics such as the appeal of literary translation, modern and contemporary Chinese literature, the history and development of Chinese cinema, popular culture in modern China, censorship, and the importance of staying true to one’s values.

3. The Value of Voice - A Conversation with Nick Couldry, Professor of Media, Communications and Social Theory in the Department of Media and Communications at the London School of Economics. This wide-ranging conversation explores how the media can be used as a filter to examine power structures, political movements, economic interests, democracy and our evolving notion of culture, the importance of voice and the challenge posed by media institutions that order the social, political, cultural, economic, and ethical dimensions of our lives.

4. Perspectives on Mass Communication - A Conversation with Denis McQuail (1935-2017), who was Emeritus Professor at the University of Amsterdam and Visiting Professor at the University of Southampton. He is widely considered to be one of the most influential scholars in the history of mass communication studies.This wide-ranging conversation provides detailed insights into how examining the media, and in particular mass media, necessarily involves a careful, probing look at our societal values; the concepts, metrics and ideas that McQuail developed to measure the sociological influence of the media; the critical role of journalism in society and more.

5. Sign Language Linguistics is based on an in-depth filmed conversation between Howard Burton and renowned researcher of sign languages Carol Padden, the Sanford I. Berman Chair in Language and Human Communication at UC San Diego. This extensive conversation covers many topics related to sign language, such as growing up with ASL, Carol’s early work with Bill Stokoe, the linguistic complexity, structure and properties of ASL and other sign languages, the development of new sign languages throughout the world, the role of gesture and embodiment, and much more.