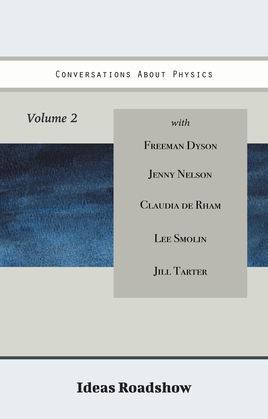 Conversations About Physics, Volume 2, includes the following 5 carefully-edited Ideas Roadshow Conversations featuring leading physicists. This collection includes a detailed preface highlighting the connections between the different books. Each book is broken into chapters with a detailed introduction and questions for discussion at the end of each chapter:

1. Pushing the Boundaries - A Conversation with former mathematical physicist and writer Freeman Dyson, who was one of the most celebrated polymaths of our age. Freeman Dyson had his academic home for more than 60 years at the Institute for Advanced Study in Princeton. He has reshaped thinking in fields from math to astrophysics to medicine, while pondering nuclear-propelled spaceships designed to transport human colonists to distant planets. During this wide-ranging conversation Freeman looks back on his simultaneously transformative careers in theoretical physics, mathematics, biology, rocket ship design, nuclear disarmament and writing.

2. Harnessing the Sun - A Conversation with Jenny Nelson, Professor of Physics and Head of the Climate Change mitigation team at the Grantham Institute at Imperial College London. After inspiring insights about Jenny Nelson’s academic journey, the conversation examines different solar energy processes, solar energy conversion technology, novel varieties of material for use in solar cells, and the materials used to build and improve photovoltaic, and other renewable, technologies, which convert energy from the sun into electricity.

3. The Pull of the Stars - A Conversation with Claudia de Rham, Professor of Theoretical Physics at Imperial College London. After inspiring insights about Claudia de Rham’s upbringing in Madagascar and her academic journey, this in-depth conversation explores her research in cosmology, the public perception and communication of science to the general public, gender issues and stereotypes in physics, and recommendations for physics teachers to inspire the next generation.

4. Examining Time - A Conversation with Lee Smolin, faculty member of Perimeter Institute for Theoretical Physics. The basis of this thought-provoking conversation are Lee Smolin’s books Life of the Cosmos and Time Reborn. This detailed discussion offers an investigation of time, both what it is and how the true nature of it impacts our world and future and provides behind-the scenes insights into the development of Lee Smolin’s groundbreaking theory on the nature of time.

5. SETI: Astronomy - A Conversation with Jill Tarter, Chair Emeritus for SETI Research at SETI Institute and Former Director of the Center for SETI Research. Astronomer Jill Tarter has spent the majority of her professional life driving forward the science and technology of the Search for Extraterrestrial Intelligence, rigorously scanning the sky for the signs of some signal sent to us from outer space. This wide-ranging conversation explores the history of the scientific search for extraterrestrial intelligence, what the present state is of our quest for signals from other planets, what those signals might look like and how we can interpret them, how SETI research has a surprisingly positive effect on other technologies, how citizens can get involved with astronomy and much more.