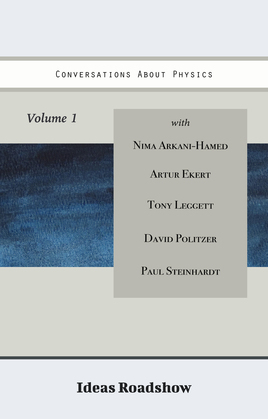 Conversations About Physics, Volume 1, includes the following 5 carefully-edited Ideas Roadshow Conversations featuring leading physicists. This collection includes a detailed preface highlighting the connections between the different books. Each book is broken into chapters with a detailed introduction and questions for discussion at the end of each chapter:

1. The Power of Principles: Physics Revealed - A Conversation with Nima Arkani-Hamed, faculty member at the renowned Institute for Advanced Study in Princeton. Prof. Arkani-Hamed is one of today’s leading particle physicists. This extensive Ideas Roadshow conversation explores how we discover the laws of nature, the “scientific method”, the relation between theory and experiment and how we can push our understanding well beyond where experiments can currently reach.

2. Cryptoreality - A Conversation with Artur Ekert, Professor of Quantum Physics at the Mathematical Institute at the University of Oxford and Director of the Centre for Quantum Technologies and Lee Kong Chian Centennial Professor at the National University of Singapore. Artur Ekert is one of the pioneers of quantum cryptography. This wide-ranging conversation provides detailed insights into his research and covers many fascinating topics such as mathematical and physical intuition, a detailed history of cryptography from antiquity to the present day and how it works in practice, the development of quantum information science, the nature of reality, and more.

3. The Problems of Physics, Reconsidered - A Conversation with Physics Nobel Laureate Tony Leggett, University of Illinois. The basis of this conversation is Tony Leggett’s book The Problems of Physics and further explores the insightful plain-speaking itemization that he developed of the physics landscape according to four basic categories—the very small (particle physics), the very large (cosmology), the very complex (condensed matter physics) and the very unclear (foundations of quantum theory)—while providing a thoughtful follow-up analysis from a contemporary perspective to assess how much progress we’ve made and which mysteries remain or have come on the scene since the book was published.

4. The Physics of Banjos - A Conversation with David Politzer, 2004 Nobel Laureate and the Richard Chace Tolman Professor of Theoretical Physics at Caltech. This extensive conversation examines many of the intriguing aspects associated with the physics of banjos, including the ocarina effect, string-stretching, the subtleties of how we hear pitch, transient growth, and the mysterious ringing sound of banjos; while also touching briefly on contemporary issues in black holes and particle physics.

5. Indiana Steinhardt and the Quest for Quasicrystals - A Conversation with Paul Steinhardt, the Albert Einstein Professor of Science and Director of the Center for Theoretical Science at Princeton University. This extensive conversation provides a comprehensive account of a marvellous scientific adventure story in the quest for a natural quasicrystal. The reader will be taken on a fascinating ride through the physics of materials, from theory, to the laboratory, to the discovery of a new state of matter, that culminated in Paul Steinhardt’s dramatic Siberian expedition. Paul Steinhardt talks about his encounters with mineral smugglers, secret diaries and quasi-mythical characters during his “Indiana Jones” expedition from Florence to Israel, Amsterdam to California, Princeton to Kamchatka which led him to find quasicrystals that are quite literally out of this world…