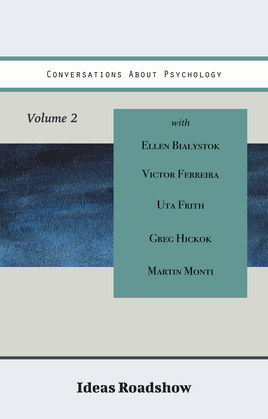 Conversations About Psychology, Volume 2, includes the following 5 carefully-edited Ideas Roadshow Conversations featuring leading researchers. This collection includes a detailed preface highlighting the connections between the different books. Each book is broken into chapters with a detailed introduction and questions for discussion at the end of each chapter:

1. The Psychology of Bilingualism - A Conversation with Ellen Bialystok, Professor of Psychology at York University. Ellen Bialystok is a world-leading expert on the effects of bilingualism on cognitive processes across our lifespan. This extensive conversation examines how Ellen discovered differences in the development of essential cognitive and language abilities for bilingual children, the use of different brain networks by monolingual and bilingual young adults performing simple conflict tasks, and the postponement of symptoms of dementia in bilingual older adults, and many more fascinating aspects of bilingualism.

2. Speaking and Thinking - A Conversation with Victor Ferreira, Professor of Psychology and Principal Investigator at the Language Production Lab at the University of California at San Diego. This extensive conversation explores Victor Ferreira’s research which is focused on language production, especially with regard to grammar, lexical structure and speaker-hearer interaction, and his interests to incorporate computational and quantitative modelling of cognitive processing. Topics under discussion include key experimental results that change our view of what is actually going on when two people talk to each other, giving us new insight into the structure of language and also how many aspects of linguistics are related to our current understanding of how the brain and mind function.

3. Exploring Autism - A Conversation with Uta Frith, Professor of Cognitive Development at University College London and one of the world’s leading experts on autism. Topics that are examined in this extensive conversation are what autism actually is, the reasons behind the increased number of diagnoses over the last few years, autism spectrum disorders, Asperger’s syndrome, mentalizing, brain imaging to research the cognitive and neurobiological bases of autism and much more.

4. Beyond Mirror Neurons - A Conversation with Greg Hickok, Professor of Cognitive science at UC Irvine, where he directs the Center for Language Science and the Auditory and Language Neuroscience Lab. This thought-provoking conversation examines Greg Hickok’s neuroscience research related to speech and language which led him to eventually reject many aspects of the mirror neuron hypothesis, while giving his views on the mechanisms behind imitation and what mirror neurons really do.

5. The Limits of Consciousness - A Conversation with Martin Monti, Associate Professor in Psychology and Neurosurgery, Brain Injury Research Centre, UCLA. This extensive conversation examines Martin Monti’s innovative work with patients who are in a vegetative state or minimally conscious state which has led to some surprising results that might well prove to be integral to our development of a deeper understanding of consciousness.