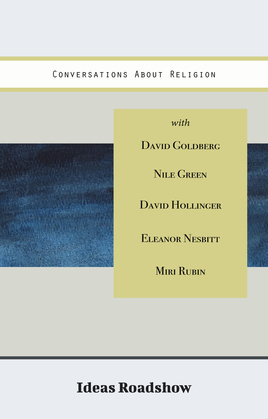 Conversations About Religion, includes the following 5 carefully-edited Ideas Roadshow Conversations featuring leading experts. This collection includes a detailed preface highlighting the connections between the different books. Each book is broken into chapters with a detailed introduction and questions for discussion at the end of each chapter:

1.Rabbi With A Cause: Israel and Identity - A Conversation with David J. Goldberg (1939-2019), former Senior Rabbi Emeritus of London’s Liberal Jewish Synagogue and author and columnist. This wide-ranging conversation is based on Goldberg’s book, This Is Not The Way: Jews, Judaism and Israel, which boldly explores a number of themes that interweave religion, politics, culture and identity in a way that is relevant to all of us, regardless of our cultural background or religious orientation. For many of us, caught as we are between love of tradition and the allure of contemporary liberal values, maintaining a coherent sense of personal identity is a highly delicate task indeed but Rabbi Goldberg has consistently been willing to meet the challenge head-on as explored in this thought-provoking discussion.

2.Religious Entrepreneurs? - A Conversation with Nile Green who holds the Ibn Khaldn Endowed Chair in World History at UCLA. Nile Green is an expert on Islamic History and religion in the world. He has traveled extensively in India, Turkey, Pakistan, China, Myanmar, Iran, Egypt, Yemen, Syria, Morocco and many more countries, to get a deep sense of the reality of situations on the ground. The basis of this detailed conversation is Nile Green’s book Terrains of Exchange which is not only an account of how the Christian missionary movement affected the development of Islam in the 19th and 20th centuries, but also offers a bold new paradigm for understanding the expansion of Islam in the modern world through the model of religious economy.

3.Battling Protestants - A Conversation with intellectual historian David Hollinger, UC Berkeley, and examines the unique role that different strands of religion have played in 20th-century American culture. This thought-provoking conversation examines intriguing aspects of the distinction between Ecumenical and Evangelical Protestantism, the often overlooked role of Ecumenical Protestantism in the history of the USA, secularization theory, the development of the two-party system, the role of missionaries, and more.

4.Exploring the Sikh Tradition - A Conversation with Eleanor Nesbitt who is Professor Emeritus of Education Studies at University of Warwick and a poet. Eleanor Nesbitt is an expert on Hindu and Sikh culture and her interdisciplinary approach straddles religious studies, educational theory, ethnography and poetry. After inspiring insights about the time Eleanor Nesbitt spent in India and her academic path, this extensive conversation provides a detailed exploration of the Sikh tradition: the history, religious tenets, other people’s misconceptions about it and more.

5.Religion and Culture: A Historian’s Tale - A Conversation with Miri Rubin, Professor of Medieval and Early Modern History at Queen Mary University of London. After behind-the-scenes insights into Miri Rubin’s career path which led her from chemistry to working in an orthopaedic hospital to studying medieval history with a ‘cultural anthropologist” persuasion to the subject of medieval Christianity, this comprehensive conversation covers several books that Miri Rubin has written, including The Life and Passion of William of Norwich; Mother of God: A History of the Virgin Mary; Emotion and Devotion: The Meaning of Mary in Medieval Religious Cultures.