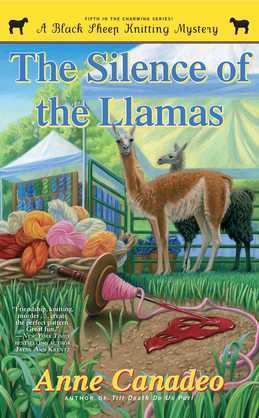 The Silence of the Llamas

Ellie and Ben Krueger arrived in Plum Harbor eager to live out their dream?tending a herd of gentle, friendly llamas for fun and profit, on a farm just beyond the village. Their grand opening fiber festival kicks off on a bright note but abruptly ends in malicious mayhem. Knitting shop owner Maggie Messina and her friends soon learn that this is not the first time a vicious visitor has called.

The Kruegers suspect that Justin Ridley, their eccentric neighbor, is the troublemaker. A misfit and loner, he?s known to roam the woods all night, though no one knows for sure what he?s hunting. Then there?s Angelica Rossi?the lovely owner of a rival fiber farm?who?s been as busy as a spider, spinning spiteful lies about the Kruegers? yarns. Or, are the naïve newcomers merely caught in the tangle of Plum Harbor politics, and an intense land protection debate?

Suddenly, vandalism turns to murder?and the Kruegers? dream descends into a nightmare. The Black Sheep knitters must pull the threads together and uncover this crafty menace . . . before more lives?and more llamas? are lost.