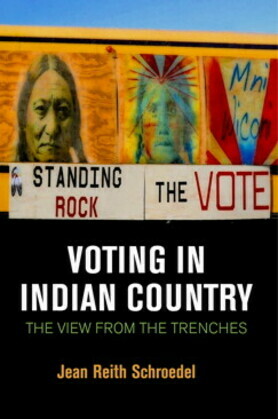 Voting in Indian Country uses conflicts over voting rights as a lens for understanding the centuries-long fight for Native self-determination.

Among the American public, there is a collective amnesia about the U.S. government's shameful policies toward the continent's original inhabitants and their descendants. Only rarely, such as during the Wounded Knee standoff in the 1970s and the recent Dakota Access Pipeline protests, do Native issues reach the public consciousness. But even during those times, there is little understanding of historical context—of the history of promises made and broken over seven generations—that shape current events. Voting in Indian Country uses conflicts over voting rights as a lens for understanding the centuries-long fight for Native self-determination. Weaving together history, politics, and law, Jean Reith Schroedel provides a view of this often-ignored struggle for social justice from the ground up.

Differentiating this volume from other voting rights books is its use of ethnographic data, including the case study of a county with a population evenly split between whites and Native Americans, as well as oral histories of the people who have chosen to fight for voting rights. The stories of these lawyers, activists, and plaintiffs illuminate both the complexity and the vividness of their experiences on the front lines and their understanding of a connection to broader Native struggles for self-determination—both to control the lands and resources promised to them in perpetuity through treaties and to freely exercise the political rights and liberties promised to all Americans.