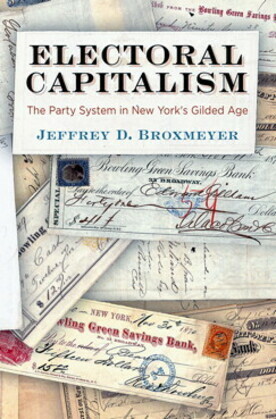 Vast fortunes grew out of the party system during the Gilded Age. In New York, party leaders experimented with novel ways to accumulate capital for political competition and personal business. Partisans established banks. They drove a speculative frenzy in finance, real estate, and railroads. And they built empires that stretched from mining to steamboats, and from liquor distilleries to newspapers. Control over political property—party organizations, public charters, taxpayer subsidies, and political offices—served to form governing coalitions, and to mobilize voting blocs.

In Electoral Capitalism, Jeffrey D. Broxmeyer reappraises the controversy over wealth inequality, and why this period was so combustible. As ranks of the dispossessed swelled, an outpouring of claims transformed the old spoils system into relief for the politically connected poor. A vibrant but scorned culture of petty officeholding thus emerged. By the turn of the century, an upsurge of grassroots protest sought to dislodge political bosses from their apex by severing the link between party and capital.

Examining New York, and its outsized role in national affairs, Broxmeyer demonstrates that electoral capitalism was a category of entrepreneurship in which the capture of public office and the accumulation of wealth were mutually reinforcing. The book uncovers hidden economic ties that wove together presidents, senators, and mayors with business allies, spoilsmen, and voters. Today, great political fortunes have dramatically returned. As current public debates invite parallels with the Gilded Age, Broxmeyer offers historical and theoretical tools to make sense of how politics begets wealth.