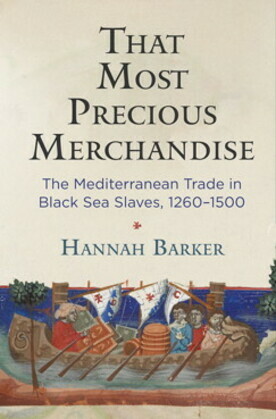 That Most Precious Merchandise

The history of the Black Sea as a source of Mediterranean slaves stretches from ancient Greek colonies to human trafficking networks in the present day. At its height during the fourteenth and early fifteenth centuries, the Black Sea slave trade was not the sole source of Mediterranean slaves; Genoese, Venetian, and Egyptian merchants bought captives taken in conflicts throughout the region, from North Africa, sub-Saharan Africa, the Balkans, and the Aegean Sea. Yet the trade in Black Sea slaves provided merchants with profit and prestige; states with military recruits, tax revenue, and diplomatic influence; and households with the service of women, men, and children.

Even though Genoa, Venice, and the Mamluk sultanate of Egypt and Greater Syria were the three most important strands in the web of the Black Sea slave trade, they have rarely been studied together. Examining Latin and Arabic sources in tandem, Hannah Barker shows that Christian and Muslim inhabitants of the Mediterranean shared a set of assumptions and practices that amounted to a common culture of slavery. Indeed, the Genoese, Venetian, and Mamluk slave trades were thoroughly entangled, with wide-ranging effects. Genoese and Venetian disruption of the Mamluk trade led to reprisals against Italian merchants living in Mamluk cities, while their participation in the trade led to scathing criticism by supporters of the crusade movement who demanded commercial powers use their leverage to weaken the force of Islam.